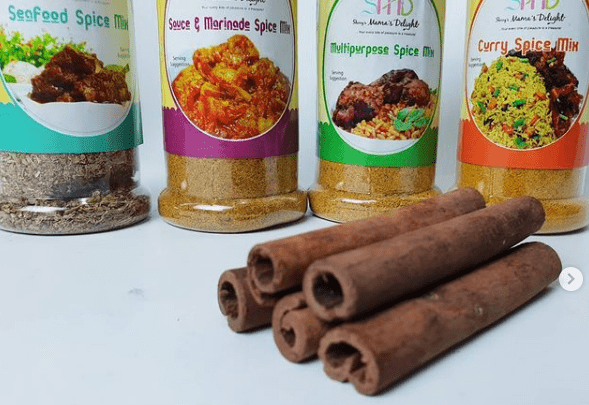 There are two types of cinnamon,cassia and ceylon.
Ceyon cinnamon is also known as the true cinnamon.
The cinnamon you have in your kitchen cabinet is most likely to be Cinnamomum cassia, which is native to China and the most common type sold in the United States and Canada.

Cinnamomum verum, also known as true cinnamon or Ceylon cinnamon, comes primarily from Sri Lanka. It is more delicately flavored than cassia and more highly prized, though less widely used. The SMD spice mix is made from the ceylon cinnamon.
The SMD Sauce & Marinade has this amazing spice as one of the major spice(this spice mix is amazing in snacks). The sauce& marinade is wonderful in our Moroccan fried rice,Indian cuisinea,pasta and mexican diahes. The smd seafood,multipurpose and curry spice mix also has cinnamon added in varried quantities.

Cinnamon is a spice obtained from the inner bark of several tree species from the genus Cinnamomum. Cinnamon is used mainly as an aromatic condiment and flavouring additive in a wide variety of cuisines, sweet and savoury dishes, breakfast cereals, snackfoods, tea and traditional foods.
Cinnamon is a highly delicious and medicinal spice.

It has been known for its medicinal benefits before modern science confirmed it.

Some of the health benefits are:

– It is loaded with antioxidant
– Cinamon has the potential to stop the risk of heart diseases
– It has anti-inflamatory properties.
– Cinnamon may protect your body against the growth of cancer.

– Cinnamon can increase sensitivity to the hormone insulin.

Please read and feed your soul with the healing power of cinnamon spice.
With the SMD range,you are not only using our spice for our delicious fragrant flavours, but you’ve turn your meals to medicine with SMD spice mix while nourishing your body!